In the early 1940s, Jack Coggins was commissioned to produce illustrations for the controversial New York Daily Newspaper PM, which was published 5 days a week plus a Sunday issue from June 1940 until its demise in June 1948, almost 2500 issues later. I have found several issues containing illustrations by Jack and these are reproduced below. There are very few of these newspapers still in existence - all of these were obtained from a U.S. eBay seller who fortunately saved a large collection from being dumped at the last minute. I missed out on two issues because bidding went over US$150, and I don't expect to find any more copies of these issues, but I managed to obtain images of Jack's illustrations. For some background information about PM, click here

To view the full size art please click on the image. 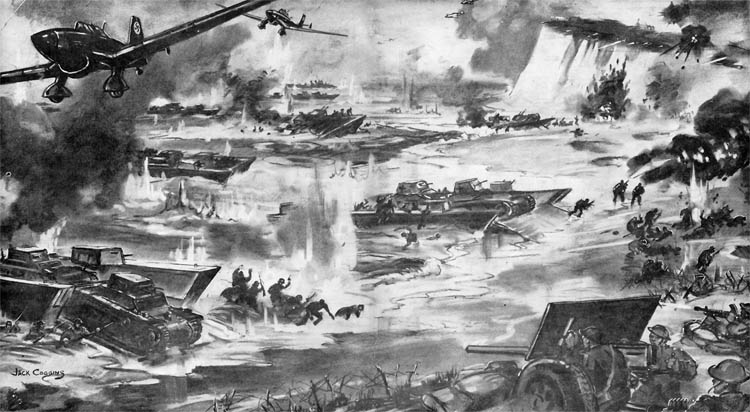 Illustration Caption
This week the Nazis will have to make good their vaunted plan of invading England or abandon it for the winter, experts think. So Artist Jack Coggins shows what will happen under the chalk cliffs of Dover if Hitler moves. On top of the cliffs at right, heavy coast guns and smaller field pieces and anti-tank guns fire at the opposite coast of the channel and at the invaders. In right foreground, anti-tank guns and Bren guns fire at the German concrete barges and troops. At the left are German Stukas trying to cover landing operations. Supermarine Spitfires are at right center, coming up to battle. The landing Germans are armed with standard model 97 Mauser rifles and light one-man flame throwers.

Sometime between now and August the Nazis must make good their threat to invade England - or give up the idea. By next Spring U.S. aid will probably have made the RAF too formidable for the Nazis to attempt a break-through onto British soil. If the Germans decide to try invasion, they'll probably come at night in fleets of great barges. Destroyers and submarines will guard them crossing the Channel. Wave after wave of fighter planes and bombers will protect them overhead. 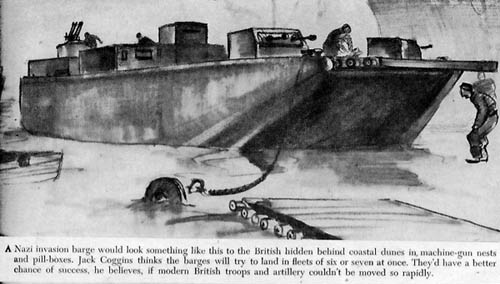 No-one in the U.S.A. or England can or will tell exactly what these barges look like, how many men and tanks they can carry, or how fast they travel. Expert military opinion has them resembling everything from vast, speedy sea-sleds to clumsy wallowing scows towed by tugs or bigger vessels. The sketches on these pages represent a special kind of expert opinion. They were drawn by Jack Coggins, a marine painter, and show his idea of the kind of invasion barges the Nazis are building. Mr. Coggins' drawings are based on a an extensive knowledge of functional ship design gathered from many years study of Admiralty models, ships of all types, and ship blueprints. He was born in Folkestone, England, the very spot the Nazis are most likely to invade, and he knows the strengths and weaknesses of the Channel coast - how the tides run, the width of the beaches, how sharply they shelve off. Since the war began he has devoted most of his time to war illustrating.

Before making his blueprint of a Nazi invasion force, Mr. Coggins imagined himself in Hitler's shoes. If he were going to invade a hostile island, he thought, and push past coastal defenses, he'd have to be able to transport and land wave after wave of troops. Success of the invasion would hinge on his ability to do this. Second, he'd have to transport troops across the Channel in boats that could be run up on a beach. Unloading men on small boats from freighters, cruisers or destroyers anchored off shore would take too long. Speed would be mandatory. Third, he'd have to be able to land light artillery and machine guns on the beach to back up the landing forces. From Hitler's point of view, Mr. Coggins thought, these were the three basic requirements for an invasion barge. Hundreds would be needed because so many would be lost. British torpedos and dive bombers would blow many out of the water. And the first ships to reach the British coast would probably be completely wiped out. 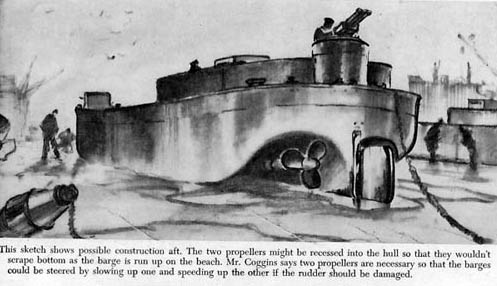 This meant, Mr Coggins figured, that the barges would have to be simply and cheaply made - a factor that ruled out expensive sea sleds. They'd have to be shallow-bottomed so they could be easily beached. They'd have to have room for at least one light tank, and have some kind of runway forward to roll it ashore. To avoid the danger of wallowing helplessly if their towing tugs were crippled, the barges would probably be self-propelled. they would be sufficiently armed to defend themselves against fighter planes and bombers, but not too heavily and expensively armed to slow them down unduly. Mr. Coggins painstakingly worked all these musts into the invasion barge he sketched on the opposite page. It's 60 feet long, 20 feet wide and made of light steel. The stern is lower in the water than the bow, so that it can be easily run up on a shelving beach. It's flat bottomed and very shallow, drawing 40 inches of water aft, and 30 inches forward. A nautical man would say that it's "trimmed by the stern". It displaces about 85 tons. The invasion barge wouldn't be any bigger than this, Mr. Coggins thinks, because it would have to nose its way through heavily mined waters off-shore, past hidden oil pipes that will burst into flames if touched, through smoke screens, shell and machine gun fire.

A bigger barge would be less maneuverable, less able to slip through coastal defence traps. The forward two thirds of the barge is a hollow shell. Steel shelves, five feet wide, curve inwards to make protective side decks under which troops can huddle out of gun fire. Mr. Coggins thinks the barges would carry a maximim of 50 landing troops, and a crew of three. Across the bow he sketched in a 20 foot wide runway on rollers and operated by block and tackle. Troops could take cover under it during the crossing, but as soon as the barge is beached it could be lowered to the sand, making a landing bridge for the six-ton tank which the barge carries mid-ships. The tanks would rumble off the barge first to form a shield for the landing troops. Mr. Coggins' theroetical barge is powered by two 100 horsepower Diesel engines. They're located in an engine room aft that's armored to withstand heavy machine gun bullets. The Diesels could drive two large propellors in the rear, and drive the barge from seven to eight knots.

Mr. Coggins doesn't believe rumors that the barges can make 25 knots. To drive a hull of this type and weight that fast would not only require tremendously powerful engines, but it might cause the flat bottomed barge to nosedive. Other details of the theoretical barge; The barge is armed with two revolving turrets on either side of the runway forward, each containing two 50-caliber machine guns. The tank also carries two 50-caliber machine guns which will be used to protect landing troops. Directly behind the engine room is an open cockpit, which holds two 81mm tranch mortars. They'll shell machine gun nests and blast openings in barbed wire as the barge approaches the beach. The trench mortars are moveable and can be carried ashore if the landing is successful. Right behind the trench mortars is a multiple machine gun in an anti-aircraft mount. Its job is to keep fighter planes at bay during the crossing. This light armament wouldn't protect the barges against a direct hit from a torpedo and their side plating could be ripped open by a light, 75mm shell. But Mr. Coggins thinks Hitler anticipates losing 50 per cent of the barges. He thinks Der Fuerher plans to use half of them as a suicide squad to clear the way for a successful landing of the other half.

Here is the actual invasion as Jack Coggins imagines it. To the right of the barge and a little offshore is a Rhine River freighter. The Germans already have hundreds of them and got many more when they took over Holland. The freighter is about 200 feet long and 23 feet wide. With a 670 ton load it draws just over six and one half feet. Troops may cross in its two cargo holds and land in rubber boats if barge crews can gain a foothold. 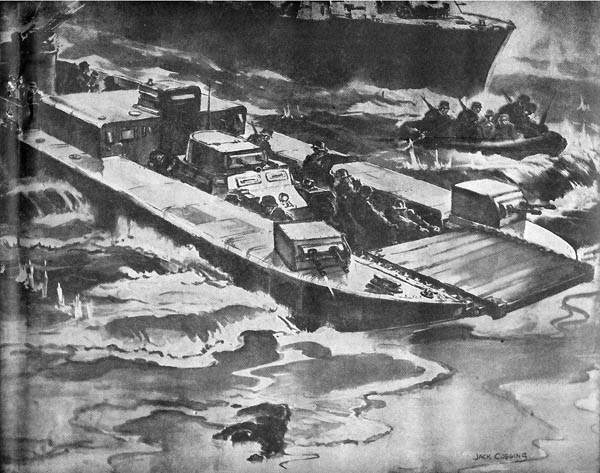 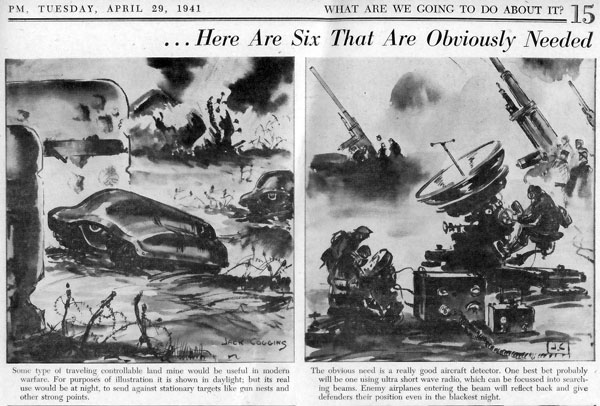 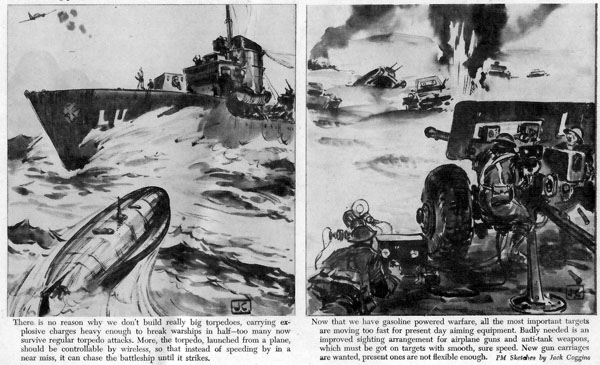 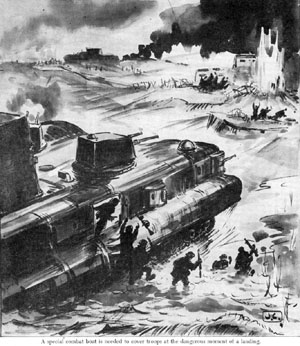 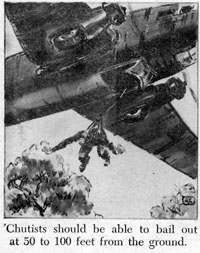 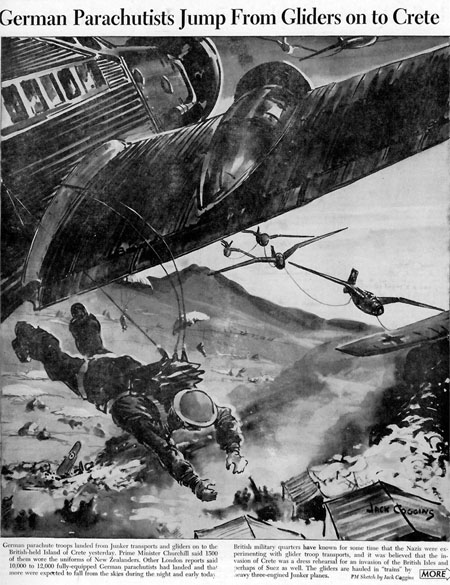 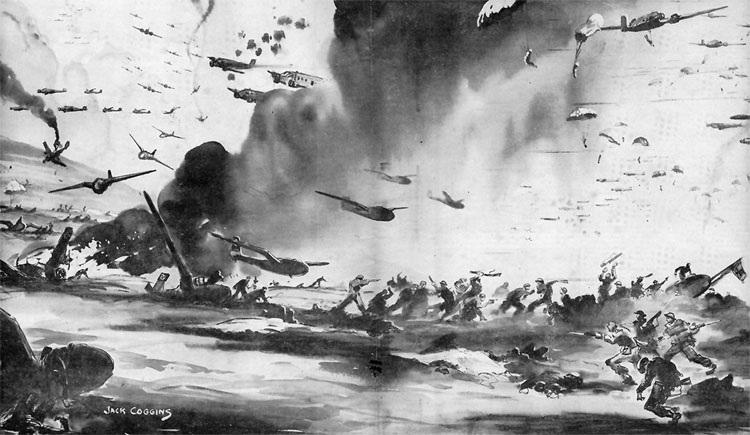 Illustration Caption
Jack Coggins's sketch for PM is based on reports of the fighting from London, which estimated this morning that parachutes, gliders, transport planes and ships had landed up to 15,000 Germans to oppose 30,000 Britons, New Zealanders and Greeks.

Illustration CaptionThe greatest tank battles in the history of warfare have been raging in West Russia for the last week and a half as the world's two mightiest mechanised armies, the German and Russian, clash. Jack Coggins, veteran sketcher of battle scenes for PM, here portrays his conception of one of these encounters.

A tank battle, first of all, includes almost every conceivable type of weapon in addition to tanks. Tanks themselves cannot hold ground, hence infantry must co-operate with them. Nor can they supply themselves. And there are certain targets they cannot batter down. So artillery must be used. So also engineers. Here, then, is what is happening in the sketch which Mr. Coggins has drawn.

Nazi tanks are advancing from the left - light tanks feeling out fortifications and carrying out reconnaissance missions ahead, then the mediums with heavy caliber guns for pounding the more important defense positions. In the left foreground you can make out Nazi infantrymen advancing in the shelter of tank fire to lay explosives against a Red Army pillbox. German field artillery is shelling Russian positions. German anti-tank guns at left are being towed into position to go to work on Russian tanks.

The Russians are replying with as many types of weapons as the Nazis. In the right foreground are Red anti-tank guns. Advancing against the Nazis from upper right are Russian tanks. Field artillery in the upper right is blasting German infantry and anti-tank guns attempting to come up to support the German tanks. Much of the Russian effort is aimed at the infantry as well as the enemy tanks.

You will note that both sides are making extensive use of smoke screens, generally laid by tanks or with special small mortars throwing small smoke bombs to conceal the sources of your own fire. Both twe Germans and Russians have long made extensive use of smoke - DNB, the Nazi news agency, dresses it up with the fancy name of "artificial fog". American and British armies have never made such extensive use of it.

The German objectives, of course, are to force a passage through the Soviet anti-tank defense and to send the armored head of the plunging panzer column farther into Russia, where it can disrupt communications and generally raise Cain. The infantry follows close behind to keep the panzer forces' lines open. The Russian objective is to separate tanks from support, then annihilate the tanks. 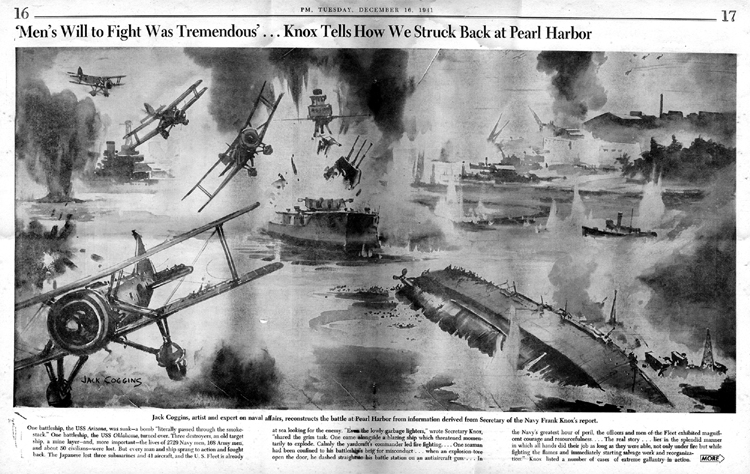 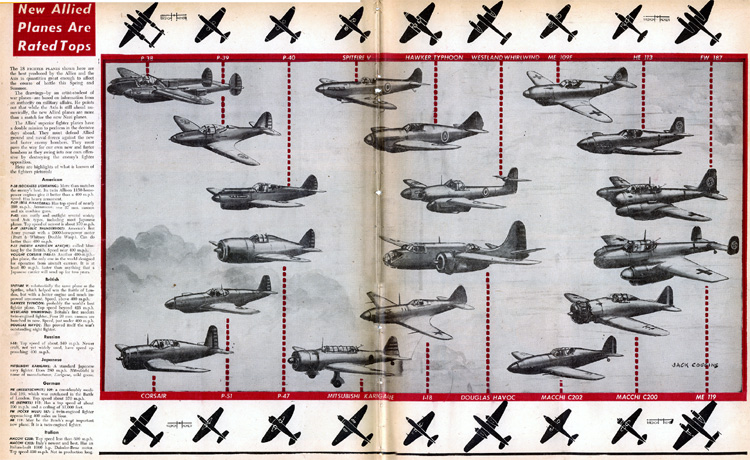 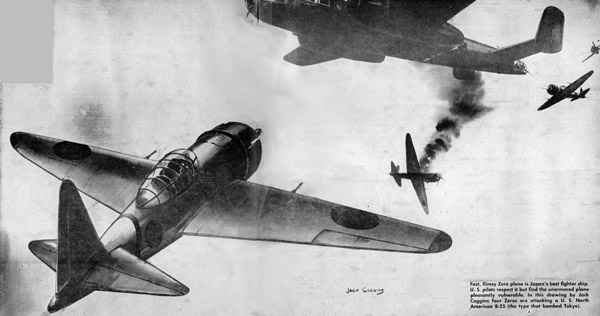