This is an oil painting signed by Jack Coggins on a canvas scroll approx 2.5 feet (76 cm) high by 17 feet (5.2 metres) long. It was bought in the 80s from New York, and was supposedly from the wall of a house. I have stitched together several images as well as I could and the complete image is shown below (the strange lighting is a result of the stitching). It seems to be in rather poor condition and in need of restoration. It is now owned by a collector in Los Angeles, CA.

Scroll across to see the full image

The painting is obviously of Hell and there are many allegorical literary references - one can sit for a long time just studying all the activity. The signature on the painting seems to be genuine, and while it is definitely Jack's style of painting, the subject matter is very unusual for Jack's work. We immediately noticed a striking similarity to the style of the famous Australian artist and author Norman Lindsay (two images of his works are shown below for comparison). We found that Norman Lindsay was well known in New York, and was actually in New York during 1931-32, at exactly the same time that Jack was at the Grand Central School of Art, so it is quite likely that Jack may have been influenced by Lindsay's work, or even come into contact with him, during his student days. If this is correct, this work may well have been executed as a student exercise. 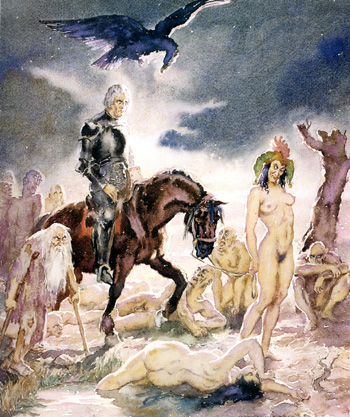 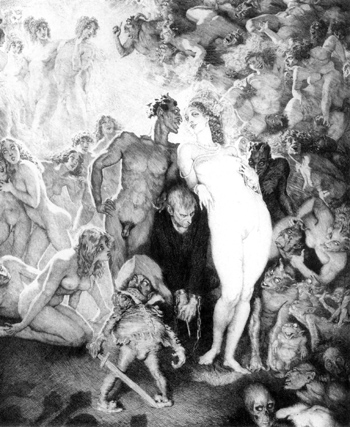 This comment was received from the Norman Lindsay Galleries. "What a fascinating scroll. It certainly seems that Jack may have seen some of Norman's works prior to painting the scroll. The subject matter has some very 'Lindsay' like characters in it, that are very much out of sync with Jack's normal work. Norman's work was exhibited in New York at the Anderson Galleries from December 1927 to January 1928, that had a brief favourable notice in the New York Times. I am not aware of any exhibitions that were in New York during their visit at the end of 1931 as Norman was talking to publishers about books and publishing."