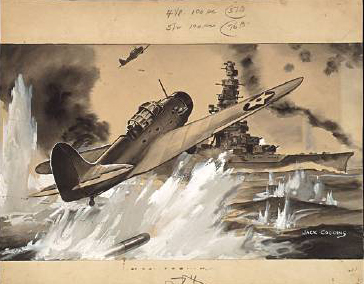 Original Coggins gouache on board, painting for a Westinghouse advert, circa 1942. The work measures 14 x 11 inches, and is signed in the lower right corner. It sold at auction for US$549.00

Following the Japanese Navy's devastating attack on Pearl Harbor on December 7, 1941, American morale demanded a major victory in the Pacific, and a quick one at that. The U.S. Navy gave public trust the boost it desperately needed on June 4, 1942, when they destroyed the bulk of the Japanese fleet's aircraft carriers at the Battle of Midway. The principal U.S. weapon during this battle was the Douglas Dauntless SBD torpedo bomber, depicted here on approach to a Japanese destroyer. The Dauntless was arguably obsolete, even at that early stage of the war, but they were dependable and they did their job, and they were one of the easier bombers to land; a key factor for carrier based aircraft. Many of the Dauntless bombers were retrofitted with Westinghouse's new ASB radar units. The company, proud of its contribution to the war effort and desperately seeking to keep their name in the public eye even though unable to produce any consumer goods, commissioned artist Jack Coggins to produce this detailed illustration of "their" Dauntless in action. As you can see, Coggins delivered the requested work admirably. This stupendous action illustration depicts a stripped down Dauntless as it starts its ascent, having just dropped its payload. Thanks to Westinghouse the Dauntless's crew found their target.